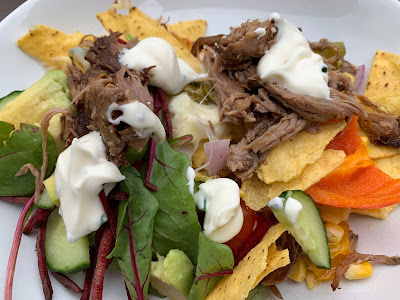 We started it at 9 o'clock this morning. We put the pork in the slow cooker with spices. 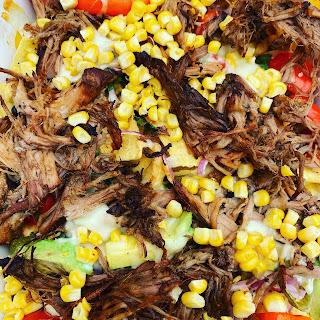 This afternoon I cut some cherry tomatoes. I spread the nachos about in a BIIIIIIIGGGG BOOOWWWL.  I chopped corriander which was very very intense. We sprinkled on red onion and red peppers and avocado.  Then I ripped the mozarella cheese and we had grated cheddar cheese and some jalepenos but not on all of it. 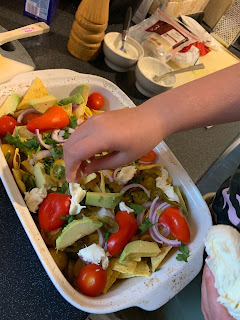 Daddy cooked some sweetcorn on the BBQ and Mummy put the nachos in the oven to melt the cheese. Mummy used a fork to shred the pork and we put it on top and put it in the oven.

I made a dressing. The dressing was creme fraiche which is like yoghurt. And some chives and black pepper. I kind of liked the dressing, but it wasn't that good. 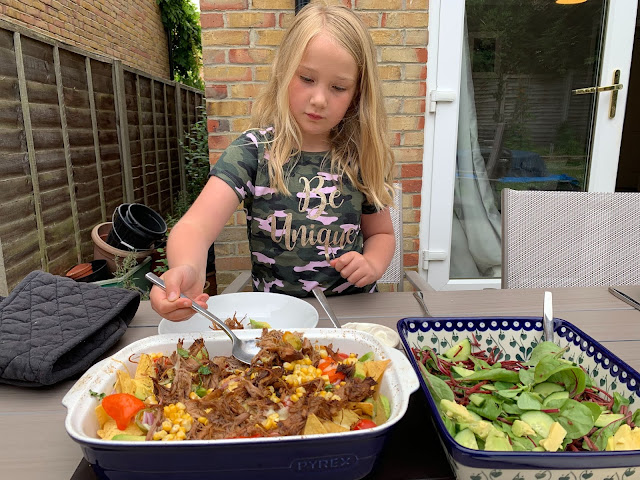 My dinner was as good as my dream. It wasn't too spicy.

If I make it again I think I would put on a tiny bit more cheese onto it. The corriander was very strong. I ate as much as my head. I did not like the avocado.

Popular posts from this blog

June 16, 2019
This weekend I stayed with my Grandma and Grandpa and I wanted to cook dinner for them. I made a pesto spaghetti meal which I saw in Waitrose when I went shopping with Mummy. I made the pesto out of: frozen peas chilli almonds parmesan cheese mint olive oil We stirred it into some spaghetti and I had lemon juice on it. We also had salad and for pudding I ate lots of fruit - strawberries, blueberries and raspberries. The pea pesto tasted super yummy and we had Appletiser. I am going to make this again at home for Mummy and Daddy. Thanks, bye.
1 comment
Read more

June 03, 2021
On Saturday I made a Korean barbecue with my Grandma and Grandpa. We did this because grandma had won a barbecue course and we were offered to do it with them – So obviously we said yes. the course was online and the cookery people gave us the instructions of what to do. I had the best time because I had not been with my Grandma and Grandpa for a long time because of covid 19.   I made chicken wings Korean barbecue style and strips of Korean beef. The chicken wings had a sweet marinade and a spicy barbecue sauce on. The sauce was sweet but had a taste of chilli from the “Gojuchang” chilli paste that we put in it when it was cooking. The beef was cut long and thin; kind of like stir fry beef.   It was cooked to perfection - thank you Daddy and Grandpa.   We also had spicy cabbage and carrot slaw with peanut sauce. The peanut sauce was very yummy. I made the peanut sauce with peanut butter, garlic, ginger, vinegar, oil and soy and tamarind. The spicy cabbage is very yummy if you pu
2 comments
Read more

The great button cook off

April 27, 2019
Today we did a family cook off. I chose to do the main and a fish course with my mum. I made venison steaks with broccoli and cheese gratins and chilli and chocolate. For the fish course we made cod and black pudding with lardons and home made tomato ketchup. STARTER - Lara and Daddy FISH - Mummy and Me MAIN - Me and Mummy PUDDING - Daddy and Lara Which do you like best?
3 comments
Read more

I am Holly. I like to cook and eat amazing food with my Mummy, my Daddy and my big sister.